Hope Partners work in Romania began in late 2021 through a partnership with Project Romanian Rescue (PRR) for Romania and the establishment of a a new Hope Center. Naturally, much of our attention has been focused on caring for Ukrainian refugees, but in the midst of that, our team continues to care for, educate and disciple the students who live at and around our Hope Center.

GIVE TO THE HOPE CENTER ROMANIA

GIVE TO HOPE CENTER ROMANIA

Recently the children were treated to a Summer Camp beyond their expectations. The camp took place in Bran, a small town in Brașov, located right in the heart of the mountains in Romania. The theme of the camp was “What to do when you don’t know what to do’’.  The kids had a lot of fun throughout the camp and left with an understanding of God’s nearness and desire to walk through each of life’s challenges and unknowns. The children had skits, testimonies, and stories that emphasized how prayer and trust in the Lord are essential to overcoming any impasse.

We interviewed our Hope Center Romania Director Marian Serban along with his daughter Cati, who serves in various ways on the team. She was excited to share about a camp that the children were able to be a part of. Please take a couple of minutes to watch this video that captured the joy and excitement of all the children involved. Or if you prefer, read the answers to the questions below.

Watch the video below

Thank you for taking the time to share about the recent summer camp, can you tell us who was invited?
Children from several projects participated in this year’s camp. There were the children that we care for, some were from the Hope Center, some are a part of the new after-school program we recently launched in Siminoc and the others are children living in the slums that we serve around the Hope Center.

How many children went to the camp?
We had 50 children! The youngest is Andreea, a 6-year-old girl from Siminoc, and the oldest, is Cristi, 17, a boy who has been with us in the center for more than 12 years. 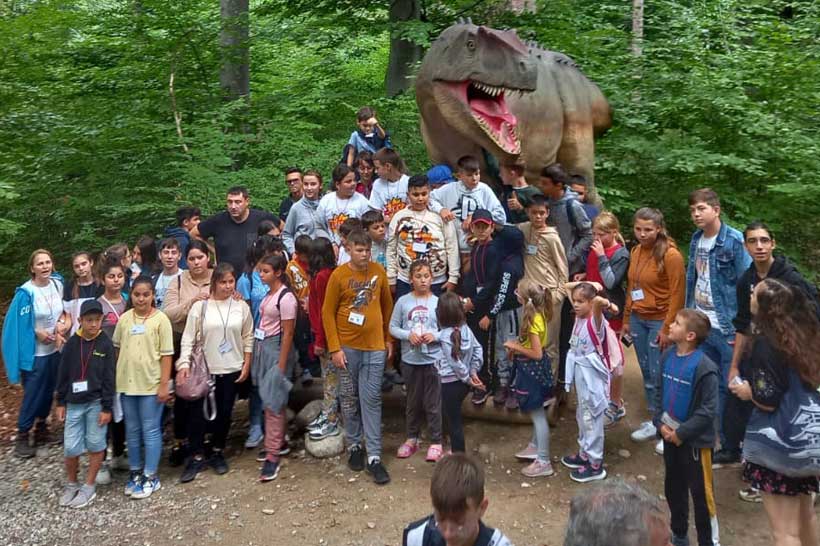 How did this camp opportunity come about?
Earlier this year at a program where I was serving, I was surprised to learn that more than half of the children I work with had never left their home village. I soon realized this was the case for the majority of children we serve. We discussed it as a team and thought it was a great opportunity to help the children we care for expand their horizons and encounter God in a camp setting.

Where was the camp located?
The camp took place in Bran, a small town in Brașov, located right in the heart of the mountains. What did they learn?
The theme of the camp was “What to do when you don’t know what to do”.  The kids had a lot of fun throughout the camp and left with an understanding of God’s nearness and a desire to walk through each of life’s challenges and unknowns. The children had skits, testimonies, and stories that emphasized how prayer and trust in the Lord are essential to overcoming any impasse.

GIVE TO THE HOPE CENTER ROMANIA

What kind of activities did the children participate in?
Each day would begin with breakfast and a devotional. From there the children would enjoy various games where they were part of a team. We also had some personal projects and craft sessions. The two daily programs were made up of songs, skits, prayer, and stories about how the Lord is at work all around us. Having the blessing of being in such a beautiful place, we wanted to include some trips to nearby tourist spots (Bran Castle, Peleș Castle, Dino Park, Brașov Zoo, and a few mountain hikes. Why was it important for you to hold this camp?
We wanted to encourage and in some way reward the children for all their work. Both the children from Bărăganu and those from Tortomanu were selected based on their dedication and commitment to the programs at the Hope Center. The team and I have been so impressed with the determination and perseverance that the children have shown in the midst of all that is going on so we really wanted to give them a break and a reward. I wanted these children to see that God is the One who not only hears them but also answers them! This camp was a reward for them!

What was the goal of the camp and did you achieve it?
The goal was to further equip the children and help them see that they could trust God always, even when they didn’t know what to do. We taught truths of God’s word and applied those truths to situations the campers find themselves in. It was fun watching them process the things they were learning and talk through how it gave direction for situations back home. We also invited campers to leave anonymous questions which we then answered in front of the group while applying the truths we had been discussing. In the short time we were there I saw growth in the way they were interacting with each other, a new joy on a lot of faces, and also an interest by many to apply what they had learned! I feel like we can say, the camp was a success and our goals were achieved. We know God opened the door for us in Romania for such a time as this. Although we continue to care for thousands of refugees, we remained focused on our mission of rescuing children and transforming their lives through acts of compassion in Jesus’ name.

Please pray for the work God has place us in Romania for and consider giving financially so more lives can be rescued and transformed.